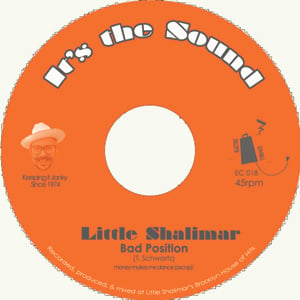 Side A: Bad Position
Side B: Melting

Little Shalimar is a Lebanese, Jewish, WASP, Kentucky Colonel that grew up writing graffiti in Flatbush, Brooklyn and going to art rock shows in Louisville, KY. He’s also a multi-instrumentalist/producer/DJ/performer that’s worked with the likes of Elvis Costello, El-P, TV On The Radio, Antibalas, and Steve Arrington. In 2000 he formed the group Chin Chin who released two albums and a number of singles on the legendary Definitive Jux label. With a live band featuring members of TV on the Radio (when they’re not touring), Antibalas, Phenomenal Handclap Band, and Chin Chin, a Little Shalimar show is a multicultural, face melting party that showcases some of Brooklyn’s most exciting musicians. His initial Electric Cowbell offering contains two songs from his 2011 debut EP, The New Pneumonia Blues (It’s The Sound). ”Bad Position” comes out of the gate with a thick, grooving bass line that’s joined by an irresistible backbeat accented by percolating bongos and shakers. The falsetto vocals fall somewhere between Prince and Calvin Harris “Melting” on the flipside continues the vibe with a sexy mid-tempo call to the dance floor.